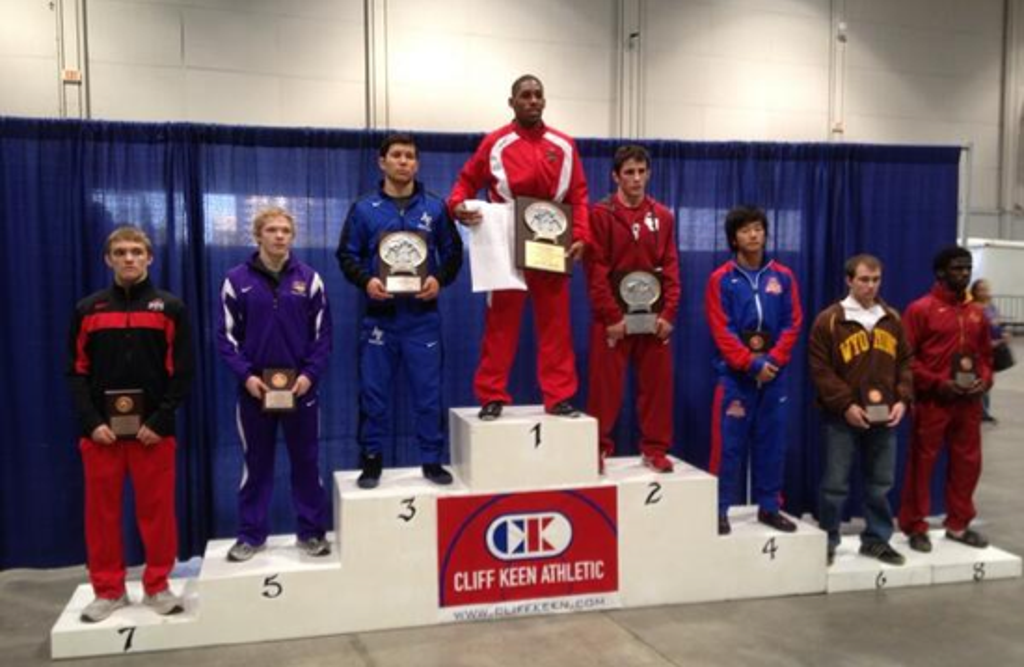 The following is Rob Koll's recap of the Cliff Keen Las Vegas tournament this weekend.  The Big Red took fourth as a team with nine wrestlers competing.  Six Cornellians placed, including champions Nahshon Garrett (125) and Gabe Dean (184) and runner up Brian Realbuto (157).  Chris Villalonga (149) was third, Mark Grey (133) was fourth and Dylan Palacio (165) was sixth.

Las Vegas Update
Other than getting stuck in the Detroit airport for 8 hours, and having to sit in the middle seat between Chris Scarlata, our trainer, and Kyle Dake for the five hour flights, the trip to Las Vegas went fairly well.  Let me assure you I will be doing the seat assignments for the Southern Scuffle!  However one hidden advantage of the eight hour layover was our ability to witness 184 pound freshman Gabe Dean sleep for eight hours on the cold, hard floor.  His ability to “catch a few rems”, in such an inhospitable environment was truly inspiring.

As for the wrestling, we had more ups than downs but most importantly we came out of this “meat grinder” of a tournament without any significant injuries.  Considering the quantity and depth of talent at the tournament this is a pleasant surprise.

Breakdown
125 Nahshon Garrett cruised to his first title.  Nahshon’s biggest frustration is the fact that a lot of his opponents try to slow him down by backing away.  This tactic can keep the score closer than it should be.

133 Mark Grey placed 4th and had a couple of nice victories.  In both losses Mark showed a weakness on bottom.  Mark is a quick study and he will fix this flaw before our next competition.  Normally I would say this is a tough fix but in Mark’s case it is a simple case of not focusing on hand control.  It might seem surprising that someone as skilled as Mark would be lacking on such a rudimentary skill.  The truth is Mark is normally so dominant that he has gotten away with poor bottom technique in the past.  Now that he is facing the best kids in the nation, this is no longer the case.

141 Mike Nevinger could have wrestled if needed, but we decided it would be prudent to give him a couple more weeks of rehab and practice before we sent him back into the fray.

149 Chris Villalonga wrestled the best tournament of his Cornell career.  All of Chris’s issues have been confidence based.  I’m confident his third place finish, which included two victories over a returning All-American who defeated Chris twice last year, will propel him to even greater heights.  Chris is quietly amassing an impressive junior campaign.  His current record is 17-1.

157 I was confident in claiming Brian Realbuto would not be flying under the radar after this weekend.  Such is the case as he rolled to a second place finish, his only loss a tight one-point defeat at the hands of the first seed.  Brian will be standing on the podium in March.  The only question is how high.

165 I would like to say that Dylan Palacio did a better job of maintaining position and not giving up so many unnecessary points.  Unfortunately/fortunately that is not the case.  Dylan knocked off four higher seeded wrestlers to place 6th.  He was close to making the finals but came out on the short end of a couple of scrambles.  I can’t say I was ever upset with Dylan because he goes so hard that he creates opportunities that would not otherwise be there.  For every match he loses because of his “all or nothing attitude”, he wins four.   I love his aggressiveness and we want to make sure this attitude stays, but at the same time he will need to reduce some of his bottom work because it puts him at too much risk.

174 Jesse Shanaman went 1-2 and did not place.  Jesse lost to two seeded wrestlers but did not have one of his better performances.  Jesse is in great condition and needs to do a better job of utilizing this strength.

184 Gabe Dean continued his impressive freshman campaign by winning his first Las Vegas Invitational championship.  Gabe is a beast on top, very good on bottom and absolutely breaks his opponents on his feet.  Other than that, he is just ok.

197 Jace Bennett went 2-2 and failed to place.  When Jace does not perform well it is inevitably when he wrestles one dimensionally.  In both of his losses, he got desperate on top, resulting in reversals, and on his feet he waited too long for the “perfect” shot.  He is best when his matches are more wide open and he just reacts.  He can make this occur by being more aggressive and wide open.  I think I will make him room with Palacio.  That will also serve as punishment for his losses!

285 Stryker Lane wrestled hard but failed to place, going 3-2. Stryker gives all he has every time he steps on the mat.  He is not the most athletic 285 pounder in the country, (don’t tell him that), but he can beat good wrestlers on the mat.  He needs to keep great position on his feet and win the close ones with his punishing ride.

That’s all for now.

All the best, Rob

The Annual Grappler Fall Classic is set to go down this weekend and after a 1-year hiatus, returns to the great sta… https://t.co/X1CnOMTr1I