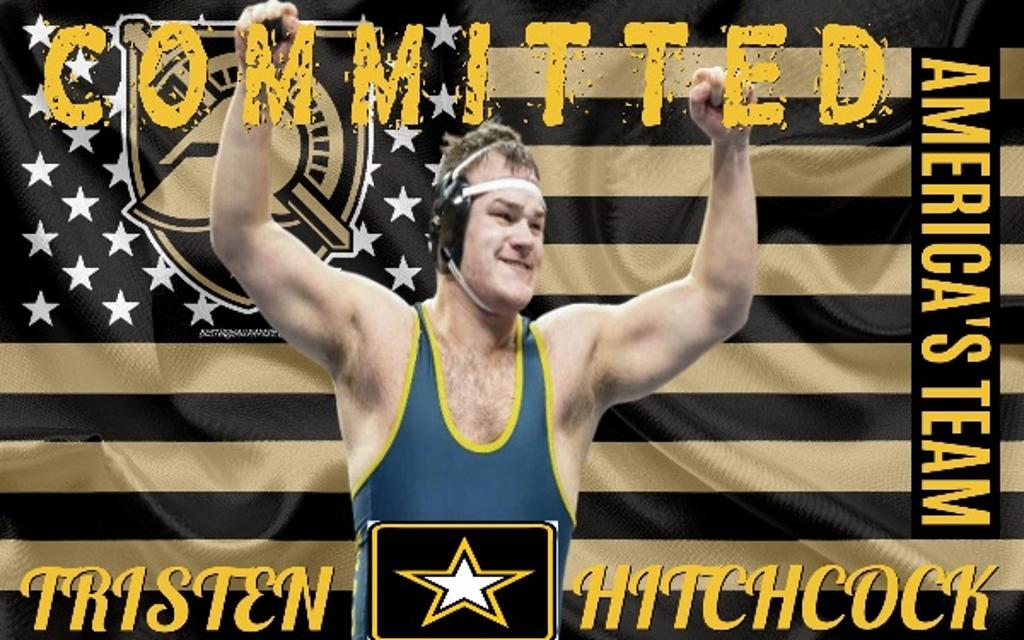 A story that was originally teased on October 26th (“The Cannons Keep Firing....And They Are Not Done Yet”), confirmed by New York Wrestling News the following day, and officially approved for public announcement today, we are proud to proclaim that 2022 NYSPHSAA Division II State titlist (@285), TRISTEN HITCHCOCK (Warrensburg-Bolton), will be remaining in the Empire State via his decision to matriculate on the campus of West Point at the United States’ Military Academy...

In one of those classic “Mule” topples “Goat” rivalry battles that is sure to have the Black Knight faithful singing “On, Brave Old Army Team” at the top of their lungs, approximately one week removed from visiting Annapolis, the Burgher senior team captain reached the conclusion that “home” exists on land, not sea!

Hitchcock’s pledge to Head Coach, Kevin Ward & staff, on Saturday just before the noon hour is the next bullet point in a scholastic resume that over the course of the past year has witnessed him emerge as one of the top and undeniable breakout stars in New York State!

A true testament to what it means to trust the process and be relentless in the pursuit of your dreams, the Journeymen Wrestling Club pupil would develop from a wrestler who finished no higher than 4th at the Section II Championships during each of his first two varsity seasons (as an 8th and 9th grader in 2019 and 2020) into the 2022 NYS DII podium-topping stud that has formally secured his place in the circle among the NCAA Division I elite!!!

Launching himself from unranked (June 2021) into the top-20 of the NYWN 2023 class polls (May 2022), he currents sit in the #18 spot following a remarkable junior campaign that yielded not only the aforementioned brass ring/state crown in Albany, but also a National Runner-up finish in Virginia Beach (NHSCA)!!

The owner of a 47-2 record last year, with his only imperfections coming at the hands of eventual DI State champs—Ethan Gallo (Minisink Valley; 2-0 decision) and Charlie Tibbitts (New Hartford; 6-1 SV decision)---it was during a stretch from December 31st-January 8th that it became abundantly clear that something special was brewing for the S2 big daddy!!!

The momentum established in late-December/early-January carried over into February’s postseason festivities as Hitchcock registered respective 16-8 and 4-3 decisions against Salem-Cambridge's Evan Day (went on to finish 3rd in NYS) to claim the top prize at both the Class D and Section II Championship tournaments for the first time in his career!!!

His berth to South Pearl Street (MVP Arena) emphatically punched, Hitchcock entered the 2022 Federation State tourney on the top line of the 285-pound bracket...One day later, he put himself in a category all of his own!!

Pinning his way into the state finale with three wins between Friday and Saturday over the 2022 Sectional champs from 1 (Charles Batista; Our Lady of Lourdes; 2:29), 6 (Charles Larose; Newfane; 2:22), and 7 (Bushey; 3:08), history was etched on the night of February 26th, when a snap + spin TD with 35 ticks remaining in sudden victory versus 2022 Section III titlist, Nick Rogers (General Brown) made him the first student-athlete (in all sport) to deliver a Federation crown to his school!!!

Having conquered and/or ruled the Empire, Hitchcock set his sights on the entire map, as he closed out his 2021-2022 term of brilliance by amassing a 5-1 tally en route to being the NHSCA Junior National runner-up!

Similar to the initial stages of his run through the NYS gauntlet, Hitchcock cruised into the semifinals in Virginia Beach, as he logged a 10-second stick versus 2021 Georgia State Qualifier, Gabe Lowe, in the round of 32, and then tacked on decisions by scores of 8-3 & 7-0 in R16 and the quarterfinals over 2022 Ohio State 5th, Owen Box, and 3x Tennessee State Qualifier, Keimel Redford!

Overcoming an 8-4 deficit early in the 3rd period, he enjoyed a highlight moment in the semifinals when he got in deep on a high-c, defended a desperation roll attempt, and then trapped 3x Prep National All-American (runner-up in 2022)/2021 NHSCA Bronze medalist, Bill Brosko (PA) for the pin at 4:42!

Detracting in no way from his banner outing, a reversal early in the 3rd period of the national finals was all that stood in the way of another Hitchcock celebratory double arm-raise, as he dropped a 2-1 heartbreaker to 2x NJSIAA State placer (3rd in 2022)/2022 Fargo Junior FS AA (6th)/2021 Super 32 4th, Max Acciardi!

Cut from the cloth and molded in the fire of the multi-gifted specimens that the service academies rejoice at attracting, identical to fellow NYS champion, Sam Sorenson (Homer), who committed to West Point on Oct. 6, Hitchcock is a generational talent on the gridiron, as evidenced by the fact that he is a two-time NYSSWA All-State selection (1st team in 2021; 2nd team in 2019), the reigning Section II Small School Defensive Player of the Year (140 tackles, 20 TFLs, 2 sacks, 4 caused fumbles), and is currently the foundation (413 yards + 9 TD rushing; 60 stops + 12 TFLs) of a still unbeaten (8-0) 2022 cohort!!

Above all else, this young man is just a consummate winner that elevates those around him...As a freshman, he helped the football program to a Section title; and on the mats, he was an integral part of a dynasty that has won Dual & Tournament team titles in two of their best three attempts (2020, 2022; no competition in 2021)…

Hitchcock is the latest member of a loaded in-coming brigade that features EIGHT of the top-200 senior prospects (per Willie Saylor/MatScouts), including projected heavyweights---Brady Colbert (#65) and Sorenson (#111)!!!

When asked how the brain trust was going to handle the embarrassment of riches, Associate Head Coach, Scott Green, gave as candid a response as possible....”We need a platoon of heavies...it will sort itself out."...

A battle to prove one’s worth?  That is Hitchcock’s modus operandi!!!