As the Evil Empire is rapidly closing out its 2021-2022 academic year, it is common practice to find yourself so tunnel visioned on what comes next that you fail to pay proper respect to all of the amazing moments and people that paved the way to this conclusion....

Summer vacation takes on the tone of a welcoming to new adventures and opportunities...

But what gets forgotten is that for every new "hello" that awaits us, there will be many a tearful or preferably celebratory "goodbye" that evens the playing field."!!

Today in the districts of Fulton and Massapequa, the harsh reality that "all good things have definitive shelf lives" is setting in as word has leaked out across both towns that their respective mat generals---Jeffrey Waldron and Ron Serrano have given notice that they will be resigning their positions as Head Coach!

Both conveying desires to spend more time with their families as the rationale behind their choices to step away, this two master cultivators of talents posted more than 300 dual wins between themselves (5 combined sectional/county dual crowns), won SEVEN Sectional/County Tournament Team Titles, saw 30 of their student-athlete win individual sectional/county gold, and were invaluable allies to 14 NYSPHSAA DI State placers!!

Favored sons in their communities due to the tireless and unrelenting pursuit of excellence that they brought to the Red Raiders and Chiefs, New York Wrestling News is both proud and privileged to shine the spotlight on two deserving icons that leave the world's oldest and greatest sport better than they inherited it!!

The very best of fortune and blessings in their next endeavors!!! 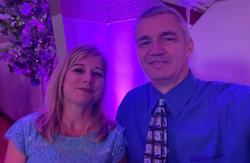 A gentleman that could just as easily be bestowed with the title of "architect" instead of "coach", for the past 16 years, the Section III Wrestling lifer [Jeffrey Waldron] has made it his mission to erect a dynasty on William Gillard Drive!!!

Instrumental in building the program from the ground up, the 1989 graduate of Phoenix, held the reigns in the Fulton district at every level of the sport, spending six years at the helm of the junior high school, and then an additional two seasons running the junior varsity, before receiving the call to ascend to the top spot on the "big club" prior to the 2014-2015 campaign!

Assembling a resume during the past eight years that unequivocally places him in a category of his own, the four-time Sectional Coach of the Year/4x SCAC League Coach of the Year honoree boasted the second highest winning percentage (trailing only Mike Conners) in team history behind an overall dual record of 152-30 (per CNYWrestling)!

His squads a mainstay in the State team polls, under his guidance, there was not a single occasion that they did not finish in the top-25, including three consecutive seasons (2018-2020) where they garnered top-10 status....2020 was the highlight for the Red, White & Green machine, as they concluded the year sitting in the #2 spot following a runner-up effort at the NYSPHSAA Large School State Dual championship (to culminate a 33-2 journey)

While the "team first" mantra was a staple of any Waldron mentored group (he also coached Cross County, Football, and Track during his tenure), there was absolutely no shortage of individual achievements in which he played an essential role!!

In addition to these 18 guaranteed punched tickets, eight other Red Raiders made the trip to Albany after receiving wild cards, raising Waldron to 25 cumulative NYSPHSAA DI participants!!

Next season may mark the commencement of a new chapter in Fulton Wrestling...But rest assured that Waldron's fingerprints are eternal, whether it be at the school itself, or Section III as a whole!

Aside from his coaching credentials, just a sample of the contributions made by Waldron include: 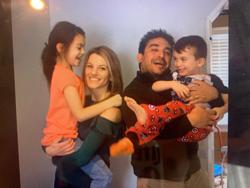 In one lone breath, the nine-year "Chief of Chiefs" [Ron Serrano] expressed perfectly the kind of remarkable, compassionate, selfless human being that those who call him husband, father, friend, and coach have known for quite some time!!

Stating "At age 42, I need to sway my focus onto my 10-year-old daughter and 7-year-old son; both are future studs, but the oldest has autism, and now it is time to concentrate on them," the former two-time Nassau County finalist/1998 titlist (4th at the NYSPHSAA tournament) for the MacArthur Generals, turned 72-match winner/3x Academic All-American at SUNY-Cortland reaffirmed that he was at peace with one of the most difficult decisions a coach ever has to face...Walking away from a Massapequa program that is still very much in the midst of climbing mountaintops!!!

In doing so, a man who has been nothing but a winner throughout every stage of his competitive and coaching career taught all of us a valuable life lesson.....THERE ARE ALWAYS BIGGER PRIORITIES THAN TROPHIES!!

And while we concur fully with these sentiments, one cannot help but reflect with a sense of awe upon the pages he authored in his nearly decade-long stay as part of the Blue & Gold's storied tradition!

Appointed to be the successor to Joe Catalanotto, following a 2012-2013 season that witnessed the Chiefs' finish 14th in the team race at the Section VIII Championships, Serrano wasted little time in announcing his presence with authority, leading 'Pequa to a semifinal appearance in the County Dual tournament, followed by a top-4 showing at the S8 Tournament in his inaugural year calling the shots on Merrick Road!

One year later (2014-2015), the team matched their dual playoff effort, but moved two rungs up on the ladder in the tournament format, finishing in bronze medal position at the County Championships...

And in season #3, the pattern grow more apparent, as Massapequa secured County runner-up status in both the dual and tournament championships...

Another double silver was obtained in 2018!!!

Then the 2019 saga rolled around and the heartbreak of being bridesmaids was forever silenced as the Chiefs would amass an immaculate 31-0 dual record en route to claiming the 2019 NYSPHSAA DI State Dual gold (41-29 over Hilton), as well as picking up the school's first S8 Dual title since 2011....

They later hoisted Nassau Tourney hardware for the first time in 20 years (1999) and just missed a sweep of all major brass rings when they settled for 2nd (behind Hilton) at the NYSPHSAA Large School Tournament Championships!

In recognition of this monster display, Serrano, was named as the recipient of the 2019 New York State Coach of the Year....He'd earn this coveted honored again in 2021 after the Chiefs' won their third overall (2 Dual, 1 Tournament) County title in an unofficial capacity during the COVID compromised winter festivities!

His comprehensive dual tally sits at an outstanding 156-26!!

Shifting attention towards the individual exploits of Serrano trained pupils, all in all, per the Long Island Wrestling Association database, since assuming command of the enterprise, 62 total wrestlers have registered official All-County distinction, with a group of seven student-athletes accounting for 10 county titles (Chase Liardi-3x, Anthony Conetta-2x)....Two more crowns (Carlos Arango & Alex Giuliani) were added in 2021 at the "Unofficial" S8 Championships!...Paul Brachfeld (1st @195 in 2016) was the first to do the deed, while Conetta closed out the list with his 2022 gold at 145 pounds!

Stressing the importance of balance/well-roundness, yet another source of pride for Serrano is the fact that his team were a perfect 9-for-9 in collecting Scholar Athlete Team glory!

A case of "see ya later" rather than a permanent "ride into the sunset", Serrano has not ruled out the possibility of a future return to the bench!...Leaving that door ajar in his closing remarks, he said, "After I am satisfied with the progress on the home front, I can envision myself coming back to the sport; Only time will tell."!

Gallagher has some company! Fork's Tyler Ferrara is approaching that top spot - State Champs Sorenson & Gallo round out the Top 4