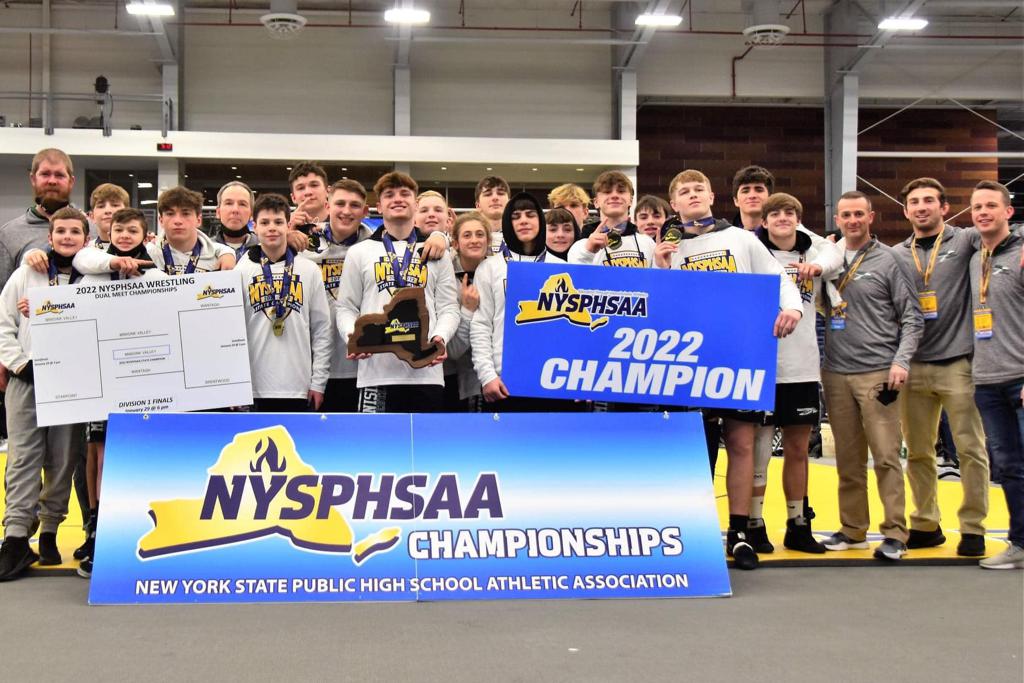 In the 1970s, legendary muppet, Kermit the Frog, sang "It ain't being green."....But with all due respect to Miss Piggy, Gonzo, Fozzie, Scooter, and for that matter, series creator, Jim Henson, none of these characters wrestled for Hall of Famer, Kevin Gallagher's Minisink Valley Warriors; because if they had, they would have realized that to be a part of that tradition requires you to be an ANIMAL!!!

And that is precisely the demeanor, attitude, and commitment demonstrated this past Saturday by the five-time defending Section 9 Dual champs as they cruised to a second straight NYSPHSAA Large School State Dual title behind a 49-13 triumph over Section VIII Wantagh in a finale of unbeatens featuring NYWN's #1 and #2 ranked programs!

Getting their arm raised in nine of 13 individual bouts, the top-seeded Green & White machine jumped out to a commanding 43-3 lead before their Nassau counterparts were able to string together a mini winning streak towards the end of this clash of respective/literal Warriors!

The championship dual kicking off at the 138 pound weight class, 2020 NYS DI State Champion/2021 Super 32 titlist/current #1 freshman in America, PJ Duke (NYWN DI 1st/#3 in the nation per FloWrestling), wasted no time in setting a tone for the kind of evening it was going to be for MV, striking for two takedowns inside the opening 15 seconds to build a 4-1 lead before using a bar to stick Andrew Montagano at the 0:34 mark to give Minisink the immediate 6-0 advantage!!

At 145 pounds, 2021 NHSCA All-American/NYWN HM, Luke Greiner, prevailed in one of the most competitive matches of the finals when he snuck out the backdoor for a reversal with 1:10 remaining in the 3rd period to break a 4-4 deadlock with 2019 S8 5th, Jesse Vanorden...The 2020 S9 6th [Greiner] then proceeded to ride out the last 70 seconds of duration to emerge with the 6-4 decision...The euphoria of a clutch "w" was accompanied no doubt by a sense of relief for the MV sophomore, who led 4-0 at the start of the final 2:00,  but was tossed (2+2) and had to fight off his back to set up the exciting conclusion.

Wantagh would get on the board at 152 pounds as this time it was their turn for some late heroics, as senior captain/West Point  bound, Ben Rogers (2x NYS medalist/2021 NHSCA runner-up, current #2 in the polls) fought back from a 5-2 deficit in the last 1:15 of duration by locking up a cradle for the TD + 2NF to surge into the lead (6-5) against 2021 Journeymen State 5th/sixth-ranked Eric Tigue...Now on top, the Savage Wrestling Academy protege continued to apply a devastating ride, forcing a second stall warning to be issued against his foe to account for the last point in his eventual 7-5 decision to make the team score 9-3.

Any hope of a Wantagh rally was assertively dismissed one bout later as senior, George Racz (#11 @160), converted four takedowns (including two in the 3rd period) en route to a 10-1 major decision at 160 pounds over Daniel Pettinato, that swung momentum back into the corner of Minisink Valley!

Up 13-3  with nine weights still to be contested, MV would blow open the dual in emphatic fashion from 170-102 when they notched FIVE straight 1st period falls...

Not relying on the cradle, but getting the job done nonetheless was big man (285), Aiden Gove, whose weapon of choice was a power-half in his 1:17 pin of Richie Benkovic.

Serving as the sweet spots in what turned into a rather sour ending for the 2018 State Champs [Wantagh] would be the sophomore twin terrors---Anthony and Joseph Clem, as well as 11th grader, Ryan Arbeit (126), who combined to peel off wins in the last three contested bouts...

At 110 pounds, it was the 2021 Journeymen State 7th/present #4, Anthony, combining for three TDs between the 1st and 2nd periods to come away with a 7-2 decision over talented youngster, Wyatt Boice!

Joseph, the 2020 Section 8 silver medalist, who coincidentally is also holding down the #4 slot at his weight, got the better of 50/50 throw exchanges in the 2nd and 3rd periods to yield 10 of his 13 total points as part of a 13-0 major over 2019 S9 Bronze medalist/2019 USAW 16U Women's FS National Champion, Sofia Macaluso (NYWN HM; #3 in the nation in the 2021-2022 USAW Girls HS polls)....The loss to Clem was the lone suffered by Macaluso, who recorded falls in each of her three earlier appearances (highlighted by a 1:17 fall against fellow honorable mention/2020 S4 titlist, Ryan Massengale of Horseheads)!!

Arbeit, who took 5th in Nassau in 2020, etched out a 6-5 decision versus 2020 S9 6th, Anthony Tresch, when he secured a reversal in the third overtime and then rode out for the win...A back-and-forth clash, Tresch drew first blood with a takedown in the 1st period, but Arbeit responded with a reversal in the 2nd and then a TD of his own in the 3rd...Tresch (escaped at the onset of the 3rd to briefly lead, 3-2) evened the bout at 4 apiece when he freed himself in the last :06 of regulation.  A second stall call against Arbeit in the 2nd OT gave the advantage back to Tresch, but as cited above, Arbeit refused to accept defeat and found an answer at the ideal moment!

Zackary McKernan received a forfeit at 132 to close out the title dual!!!

Uhrig, Duke, Greiner, Ryder, and Gallo all completed Saturday as the owners of perfect 4-0 records as Minisink Valley punched their ticket to the finals behind earlier triumphs in pool-play over Horseheads (66-6) and Pittsford (50-12), followed by a 55-7 semifinal victory over Starpoint (advanced to the semis despite being unseeded)...

Racz, who filled the void felt when 2021 Journeymen State runner-up/2021 USAW Jr. GR National runner-up, Mikey "KID DEE" Altomer (#1 @172) sustained an injury in his first match and was kept on the sidelines for precautionary reasons the rest of the day, went 3-0!!!

ROAD TO THE FINALS 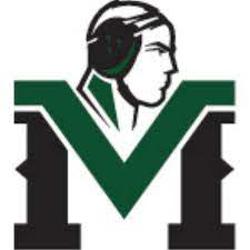 Recruitment in September...WHY NOT? Ithaca Is The Place To Be!