Kid Dynamite Is Back Atop the Globe; Gwiazdowski Finishes 5th; Hemida Makes Debut 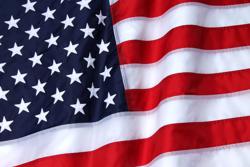 OSLO, Norway----What a start it has been for the Red, White, and Blue!!!  Just two days into a week-long affair at the 2021 UWW Senior World Championships, the contingent from the 50 states are making no bones about the mission at hand---They are there to collect "yellow" medals and team titles galore!

Anchored by New York's own Kyle Dake (2x DII State Champion for Lansing; 4x NCAA DI titlist on behalf of Cornell), who made it three straight appearances at this event (2017, 2018, 2019, 2021) brandishing the top prize when he took the crown at 74kg, the Americans are on the board with one belt and three overall medals.

Comprising an absolute murderer's row among the first group of competitors, on day #1 (Saturday morning), the trio combined to rack up a record of 10-0, including six techs, two falls (both by Taylor), and a pair of very comfortable decisions (courtesy of Dake) en route to punching their tickets to the finals of their respective weight classes.

Youssif Hemida (also at 125kg), who won a NYSPHSAA Large School gold in his swan song at Mamaroneck in 2015 before earning All-American distinction twice at the University of Maryland,  held his own in his Senior Worlds debut as the representative from Egypt.

Yianni Diakomihalis, the former 4x NYS DI champion for Hilton/current 2x NCAA titlist on behalf of Cornell, suffered the only somber news today, as he was eliminated from the competition at 65kg following a 5-1 loss in the round of 16 to 2020 Olympian (14th)/2018 Junior World bronze, Vazgen Tevanyan (Armenia)...One round prior, the two-time (2015, 2016) Cadet gold medalist from section V, who was making his making his Sr. Worlds debut, prevailed 10-0 in an All-NY collision versus 2018 NYS DI 3rd for Iona Prep, Colin Realbuto (Italy)...In one of those "six-degrees of separation" coincidences, Realbuto himself has ties to the Ithaca [Cornell] as older brothers, Brian (3x NCAA DI All-American/2015 National runner-up) and Dylan, both competed for the program....Any hope for a second life was quashed when Tevanyan succumbed by a 2-1 decision in the quarters to Mongolian, Tulga Tumur Ochir (2020 Olympic 9th/2019 World 5th). 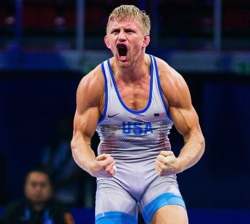 100% Dynamite....Kyle Dake is a World Champ for the third time

There is nothing wrong with an Olympic Bronze medal; for 99.99% of athletes, returning home from Tokyo with a top-3 showing would have be a cause for celebration....Kyle Dake belongs to that other .01 and he had no mercy in proving it!

Winning the first two of his now THREE world golds at the non-Olympic weight of 79kg, much like he did during his college days (four titles at four different weights), the section IV sensation showed that he is lethal anyplace, anytime, any poundage!!

Pitted against 2021 European Champion/2019 World bronze/2018 U23 World titlist, Tajmuraz Mairbekovic Salkazanov (Slovakia), in the finals, Dake would respond to a 2-1 deficit with 2:06 to go in the 2nd period by answering  for six of the last seven points of the bout on his way to the 7-3 decision...Clinging to a 3-2 edge after converting a TD with :95 still on the clock, cream rose to the top in the last half minute as the man they call "Dynamite" blew open the match a takedown + gut combo to soar to the 7-2 lead...Salkazanov did add a step out with :03 to be contested, but it was all she wrote for the Slovakian!

His performance in the finale was a continuation of the brilliance he showcased 24 hours prior when he posted 11-0, 5-0, and 9-1 victories over Vasile Diacon (Moldova), Fazli Eryilmaz (Turkey), and Azamat Nurykau (Belarus).

In his round of 16 bout versus the two-time UWW Junior World medalist/2019 runner-up [Diacon], Dake barely broke a sweat, forcing a push out, logging a takedown and then popping four guts to wrap up the win in a mere 1:12...

The quarterfinal round was a quite a bit more methodical, as the Big Red alumnus broke a scoreless tie against the 2019 U23 Bronze medalist [Eryilmaz] by inducing a push out with :45 remaining in the 1st period and then adding a takedown right before the horn to hold the 3-0 edge at the break...Dake tacked on two additional force outs during the second period...

Squaring off with a rather "chippy" foe in the semis, 3x World 5th, Nurykau, despite repeated pokes to the eyes and finger pulls, Dake kept his composure and did all of his damage during the opening three minutes, striking for a TD and then converting three guts to seize the commanding 8-0 lead...His Belarusian opposition mustered a step out in the 2nd period (to quell Dake's attempt to go unscored upon for the entirety of the tourney like he did in 2018), but it was no matter as the margin was restored to eight when mat officials hit Nurykau for a caution +1 for dirty antics....Nurykau reached the semis when he registered a late TD in a 7-7 criteria decision over 2x World finalist/2014 champ, Khetag Tsabolov (Serbia).

The (G)Wizz Kid Still Among the Elite; Takes 5th 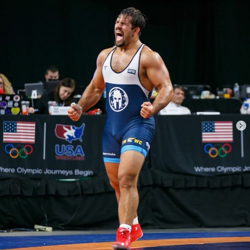 As we wrote moments after he clinched the fourth World Team spot of his senior career, the big man hailing from the Albany area is just getting started...So do not make the mistake of laying flowers on his proverbial grave just yet!!!

Knocked out of crown contention when he surrendered a pair of takedowns (including a 4pter that ended the match at the 1:50 mark), two push outs, and a turn in his 10-0 quarterfinal defeat at the hands of the eventual champion/2020 Olympic Bronze medalist/2019 Junior World silver, Amir Hossein Abbas Zare (Iran), Gwiazdowski was given new life when the Iranian successfully advanced to the finals behind a 4-0 shutout over 2x Olympic medalist (gold in '16)/4x World finalist (champ in '14 and '15), Taha Akgul (Turkey)...The local boy made the most of the reprieve, winning one of two repechage matches to place a respectable 5th

Splitting his two matches on Saturday, in advance of the loss to Zare, Gwiazdowski was impressive in emerging with an 8-3 decision in the round of 16 over 2020 Olympian (13th)/2014 Junior World titlist/former 3x NCAA All-American (5th, 3rd, 5th) for the Ducks of Oregon State, Amar Dhesi (Canada)....Striking for two TDs apiece in each of the two periods, GWizz cemented his "w" when he snapped and spun behind in the last 55 dicks for the insurance tally...Dhesi's points came off of a 1st period exposure (that made the score 4-2) and a step out in the waning seconds (:08) of the 2nd period.

Sunday commenced in the same fashion as its predecessor, as Gwiazdowski locked up a medal chance by rising to the occasion and besting 2020 Olympian (9th)/2x U23 medalist/2x Junior medalist, Dzianis Khramiankou (Belarus), 6-1, in repechage.... The clear aggressor for the majority of the "six-minute dance",  a 50/50 sequence in the final half minute of the 1st period saw the New Yorker get penetration on a single and the Belarusian counter with a lift + roll.  Originally scored as 4-1 in favor of Khramiankou, a challenge from the USA bench resulted in an overturn call that gave Gwizz a 2-0 edge at the midway point...Takedowns in the first and last 20 ticks of the 2nd period provided all the cushion necessary as NG claimed the 6-1 decision (caution +1 very late in the 2nd being the sole point for the gentleman from Europe).

In the bronze medal bout, Gwiazdowski demonstrated tremendous fortitude and heart, but ultimately fell by 6-4 decision to Akgul to close out his trip to Norway....Trailing 6-0 at the break (two takedowns + 2pt gut), the former Journeymen Wrestling Club/Joe Bena molded big man picked up his intensity exponentially during the final 3:00....Firing off shot after shot, it was not for lack of effort and work ethic that he came up short...In deep countless times, credit must be given to his Turkish foe for fending off the non-stop attempts...Gwiazdowski's points came courtesy of takedowns 30 ticks into the 2nd period and then another at the 5:56 mark. 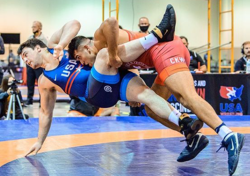 Mamaroneck in the House...Youssif Hemida makes his Senior World Debut for Egypt

Himself on the same nightmarish side of the 125kg bracket as Gwiazdowski, the former Terp [Hemida] more than held his own, posting a .500 record in his introduction to Senior Worlds...

Utilizing a step out, a takedown, and three straight turns via gut to jump out to an immediate 9-0 lead approximately 53 seconds into his qualification round bout versus 2x UWW age-group (2019-Cadet bronze; 2021 Junior bronze) medalist, Anirudh Kumar (India), the former section I superstar was able to cruise for the remainder of regulation.   He allowed only a force out in the last :40 of the 1st period and then a surrendered a takedown with 1:40 to go in the contest to account for the 9-3 decision final..

The triumph over the wrestler from India would set up a round of 16 showdown with 2021 Russian Nationals 5th place finisher, Zelimkhan Khizriev...Connecting with a smooth high-c attack for the takedown, Hemida held a 2-2 advantage on criteria at end of the 1st...Unfortunately for the NYer, his Russian opposition answered back and controlled much of the second period, notching a force out and two takedowns to propel himself into a 7-2 lead w/1:04 remaining in the bout...Never one to quit, Hemida stayed aggressive and cut into the deficit with a  step  with :15 to go, but the comeback effort was not in the cards, as he fell, 7-3.

His fate now resting in another man's palms, the 2018 U23 silver medalist [Hemida] was formally outed when Khizriev was on the losing end of a 5-0 decision to previously recognized Turk [Akgul].

Fix & Taylor's Paths to the Podium

Fix: Engaged in a war of past Junior World kings, Fix was penalized twice for passivity (once each period) and allowed a back-break counter takedown with 90 seconds remaining in the second period to drop the 4-1 decision to two-time defending Russian National champ/2018 Jr. titlist, Abasgadzhi Magomedov.

Prior to the gold-medal loss, the Cowboy was a human wrecking ball on Saturday morning, out-pointing his four oppositions to the tune of four consecutive technical falls and a  41-0 margin...Relying on a combination of sweep singles, inside trips, trap-arm guts, and really anything he felt like using, the Sandy Springs, OK resident secured a berth in the finals by racking up in order, 11-0, 10-0, 10-0, and 10-0 conquests of 2020 Olympic 5th/2011 Junior World silver, Giorgi Vangelov (Bulgaria); 2021 European Championship 15th, Arman Norik Eloyan (France); 2021 Junior World runner-up/2019 U23 silver, Ravinder Ravinder (India); and 2020 Olympian (13th)/2x Junior World bronze, Arsen Harutyunyan (Armenia)

Taylor: Renewing what has become an annual clash of the titans, it was 2x World Champion/2x Olympic finalist (gold in 2016), Hassan Aliazam Yazdanicharati,  snapping the drought (0-3) and avenging his heartbreaking loss in Tokyo versus Taylor, with a 6-2 decision...Up 2-0 at the end of the 1st thanks to a pair of force outs, the 26-year-old Iranian added insurance 27 seconds into the 2nd period with a TD...A TD by the American would trim the hole in half w/1:05 to go, but unlike their prior meetings,  Yazdanicharati did not wilt to the endless pace + attacks being applied.  Rather, it was he striking last, when he iced the win over his rival with a takedown for good measure in the last :06.

The Nittany Lion's road to Bridesmaid Blvd. had stops  past 2020 Olympian/2017 World silver, Boris Makoev (Slovakia) in the round of 16, followed by back-to-back pins (bar + half) against 2021 European Championship 14th/7th at the 2019 World Military Games, Akhmed Aibuev (France), and 4x age-group medalist (2016 Cadet Champion; 2018 Junior runner-up; 2019 Junior bronze, 2019 U23 silver), Abubakr Abakarov (Azerbaijan) in the quarter and semifinal rounds.

Gallagher has some company! Fork's Tyler Ferrara is approaching that top spot - State Champs Sorenson & Gallo round out the Top 4