Catrabone & Stewart Are Heading To GFC

For the first time in the 12 year history of the event, the Grappler Fall Classic will be streamed on the FloWrestling platform.

The GFC is held annually in October and has established itself as one of the  premiere national wrestling events. FloWrestling is the industry leader in wrestling coverage and live streaming.

The GFC enters its 12th year with a ton of momentum coming off a monstrous event last year that featured over 1700 competitors from 31 different states.

FloWrestling will stream every bout on every mat all weekend long including a the featured Elite Division Finals on Sunday, starting at 1:00pm.

The GFC Girls Folkstyle finals will go down Saturday with the Freestyle finals taking place on Sunday.

Some of today's biggest wrestling stars like Gable Steveson, Myles Amine, Mark Hall, Alex Facundo, Alec Pantaleo, Alex Marinelli and more have competed at the GFC.  Be sure to tune in live October 2nd and 3rd to see the next generation of wrestling icons GET SOME at the GFC! 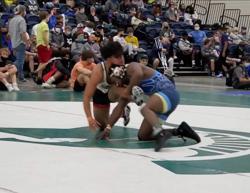 Pittsford's Nick Sanko and Cold Spring Harbor's Christian Hansen both made the podium as well last year. The torch is being passed to a pair of young sophomores from the western portion of New York in hopes of duplicating and bringing home some hardware. 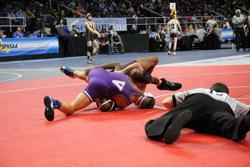 Attica-Batavia's Casper Stewart has landed on line #8 in the 135lb weight class for this weekend's Grappler Fall Classic. Stewart's progression this offseason is hard to not notice. He won a NYS title in both Freestyle and Greco before heading to Fargo to compete in the biggest offseason tournament in the country. Between both competitions, Casper compiled a 10-3 overall record and was an All-American in Greco (going 6-1 in that span).

"Placing at Fargo was great, I had a lot of support that helped me get to that position." - Casper Stewart

The sophomore is not shy to national tournaments by any means. He was an NHSCA All-American back in 2019, finishing 3rd. Within the confines of New York State, Casper is a 3x NYS qualifier (3rd in 2020) and a 2x Section 5 Runner-Up. He currently sits at #3 on NYWN Class of 2024 Big Board behind 2x NYS Champion Zack Ryder (Minisink Valley-9)and 2021 NYS Champion Joseph Manfredi (Herricks-8)

The 135lb field is one of the biggest in the tournament. If the seeds hold true, Stewart will be butted up against #9 seed Cory Thomas of powerhouse Detroit Catholic Central in Michigan in the round of 16. Thomas is only a sophomore and placed 3rd at the MHSAA Division 1 state tournament. A battle of state bronze medalists will sure be fun to watch.

The top seed at 135lbs and potential quarterfinal bout is Nasir Bailey of Illinois. Bailey is an absolute hammer who back in July won the 132lbs Freestyle Nationals in Fargo. Nasir was a 2020 Illinois State Champion and 2021 Texas State Champion.

"My mind set for this weekend is to push myself to perform in the best way possible. I am looking forward to some good competition." - CS 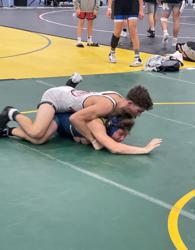 Joining his fellow New Yorker in Myrtle Beach this weekend is Cameron Catrabone of Williamsville North. Cam is entered at 135lb as well and is the #6 seed, placing him on the opposite of his empire state counterpart (Stewart). This is not the first tournament these two competitors have been entered at the same weight. Let's head back to the NHSCA Freshman Nationals in Virginia Beach where Stewart finished with a 4-2 record, losing in the blood round to eventual 4th place finisher EJ Parco of California. Catrabone on the other hand went on to a perfect 6-0 record and Freshman National Title. En route to his championship, Cam outscored his opponents 51-12 with two techs and two falls. Notably, in the quarterfinals, he pinned the aforementioned Parco in 3:47.

"Winning Freshman Nationals was the turning point for me going forward. I am ready to compete with the nation's best." - Cameron Catrabone

This past weekend at the Journeymen Fall Classic, overflow division, provided a quick tune up for this weekend barrage of high quality talent. Cam looked as sharp as can be winning 4 bouts, two via bonus as he captured the 135lb title.

"Winning the overflow tournament was nice in sense of getting me ready for this weekend. I have mostly wrestled in dual meet tournaments so having a chance of pace was nice." - CC

His winning prowess has bumped him up to the #4 spot on our Class of 2024 big board. Like Stewart, Cameron is a 3x NYS Qualifier (3-6-Q) and a 2x Section 6 champion for the Spartans. He also currently sits at #21 in Willie Saylor's (Matscouts) Class of 2024 Big Board.

His potential round of 16 opponent could be #11 seed Jacob Bostelman of Colorado. Jacob has a deep resume which includes being a 2x Colorado State Place Winner, runner-up in 2021, 4th in 2020. He is also a double (FS/GR) state champion for Colorado. With a win, most likely #3 seed Eligh Rivera of Florida awaits. This would be a battle of NHSCA Champions. Eligh won the 126lb Sophomore National title back in April. Rivera is no stranger to the GFC and plans to improve on his 8th place finish in 2020.

"I'm looking forward to wrestling these nationally ranked guys like Bailey and Rivera. My focus is on wrestling to the best of my ability" - CC

For You Ma: Burkert Earns 55kg World Bronze in Oslo

Some Did it for Respect; Others for glory; The New Yorker got it done for love!!!

Kid Dynamite Is Back Atop the Globe; Gwiazdowski Finishes 5th; Hemida Makes Debut

The holidays in the Rogers' household just got interesting...