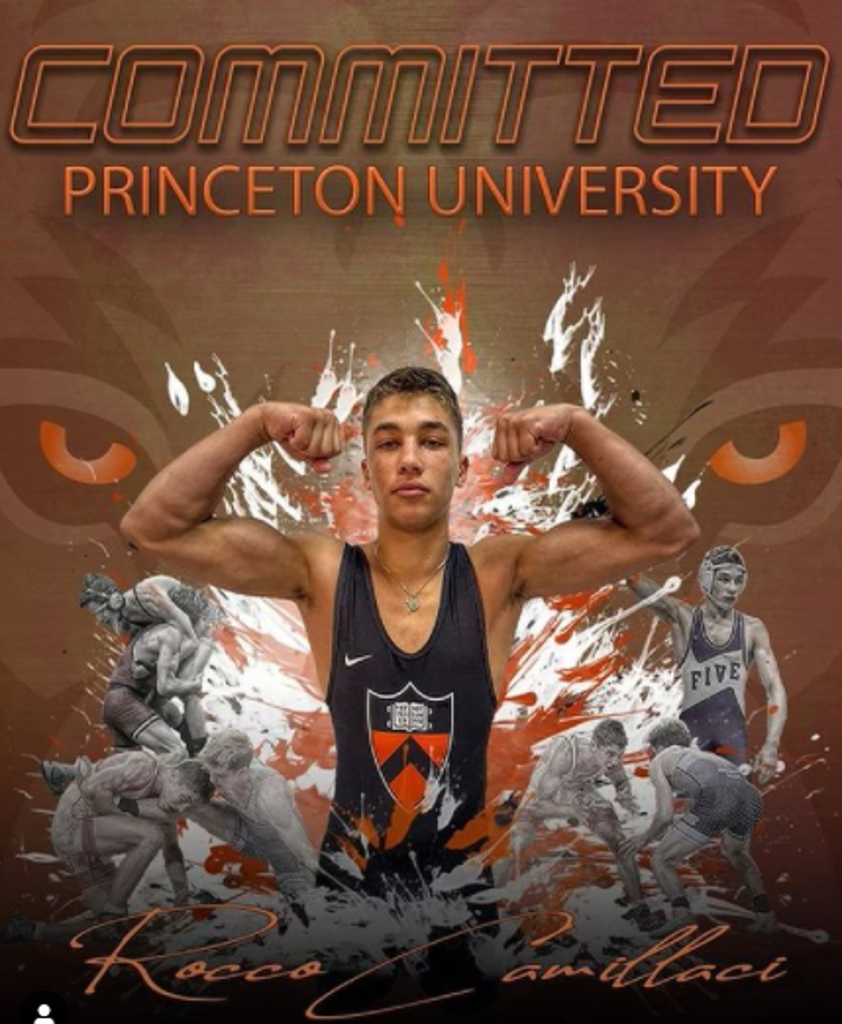 What a Sunday it was for the Hilton High School wrestling faithful!!!

Separated by a matter of hours,  two members of the Cadet royalty took massive steps on their respective journeys to prosperity and glory!

While former 4x NYSPHSAA DI State Champion (2013-2016), Yianni Diakomihalis, was busy booking his first trip to the UWW Senior World Championships, it was one of the many Section V youngsters he inspired/fellow G2-Garage training mate, making moves of his own to solidify his future (both on and off of the mats).

Taking to his personal instagram page yesterday evening to reveal the exciting breaking news, Rocco Camillaci let it be known that his services are officially off the board!!!

Regarded as the co-#2 overall in-state prospect in NYWN's 2022 class rankings (June 2021), Camillaci's pledge to the Tigers means that Head Coach, Chris Ayres, and his staff have now successfully locked up both the #1 [Kole Mulhauser; Central Square] and #2 gentlemen in New York's deep senior class!

A bona fide phenom that was ready out of the gate, Camillaci made his scholastic debut on East Avenue as a 99-pound 7th grader in 2017 and has been "wreaking havoc" and "taking names" ever since!

The owner of a remarkable 17-5 record at the State tournament (NYSPHSAA + 2021 Journeymen), the list of studs that have tasted defeat at the hands of Camillaci is nothing short of mind-blowing!!!

Four of his five career losses at the "big dance" came when opposed by a defending or future state champion, as he lost to 4x titlist, Stevo Poulin (Shenendehowa)  in the 2018 and 2019 semifinals, dropped a hard-fought 7-4 quarterfinal decision to two-timer, Zack Ryder (Minisink Valley), and lost a heartbreaking 1-0 decision in the state finals this past April to Carter Schubert (formerly of HFL; now attending Wyoming Seminary)....Given the depth of the brackets he has found himself in throughout his tenure as a Cadet, it could be valiantly argued that he commences his senior campaign sitting in the company of the "best to never win it" club!    This is a backhanded honor that if all goes well in his swan song will surely not follow him to college!

Rivaling what he has achieved under the roof of the Times Union Center is the resume he has built outside of the capital city....Complementing his four All-State accolades is a trio of podium (top-8) appearances at the quasi "Super Bowl of NYS Wrestling", the Eastern States Classic!!

Highlighted by triumphs over a 2x Massachusetts State finalist/2020 champ, Cam Soda (7-2; 2018),  three-time NYS DII medalist/2020 DII runner-up, Avery Leonard (14-3; 2019) of Milford/Cooperstown, and Lowville's  4x NY Small School State placer/2x silver medalist, Micah Roes (3-1 sv; 2020), Camillaci has ended up 7th, 4th, and 4th....To put the magnitude of his successes into proper perspective, consider the fact that approximately one year later, Roes was an NCAA DI National Qualifier on behalf of SUNY-Binghamton...The ESC was cancelled in 2021 or else he likely destined to add to his impeccable reputation in the Loch Sheldrake area!

Having already established himself as "the goods" within the confines of the Evil Empire, in the past calendar year, Camillaci has also seen his national stock reach an all-time high behind a pair of immensely strong showings at the 2020 Journeymen Fall Classic [November '20] and the 2021 USMC/USA Wrestling 16U & Junior FS/GR Nationals in Fargo [July '21)...

Pitted against current Appalachian State wrestler/former 4x Florida State finalist/2x champ, Jaekus Hines,  the NYer emerged with a 7-4 decision in the semifinals to punch his ticket to center stage!

Most recently, the monumental rise up the charts was bolstered by an impressive body of work in the FargoDome...Amassing a 6-2 curriculum vitae over the course of the three-day affair, Camillaci was the lone entry from our state to obtain All-American status in the Junior Freestyle discipline, finishing a commendable 7th at 138 pounds.

Tamed only by pair of top-10 ranked foes (#2 Casey Swiderski-MI, #9 Jude Swisher-PA), a sampling of Camillaci's signature wins in North Dakota included a 5-0 decision over 3x Oklahoma State titlist/2019 USAW Folkstyle National AA (4th) Cam Steed in the round of 32; a 5-3 decision in the blood round against returning (2019 Cadet FS 4th) Fargo AA/2x NHSCA All-American/2021 Ohio State 5th, Ismael Ayoub; and a 10-8 decision in the placement round (7th/8th) versus 2021 Illinois State champ, Kole Brower.

We Have a New #1 At 102 Pounds!!! Longwood's Anthony LaGala-Ryan Just went from the Hunter to the Hunted!

Tigers Pounce On the Field; Leave No Doubt in Successful Repeat Bid

What a dual meet season it has been; Tioga defends their D2 title; Starpoint dethrones the reigning champs

HERstory made as 13 Gifted Women Become the first to officially win NYSPHSAA Crowns; Sindoni Knocks of Griffith in Clash of national top-15s; Foufas Makes Bid for National ranking after late reversal surges her to a win over #10 Sibble

Sound Off: 2023 NYSPHSAA State Duals...Who Will Our Champions Be?

Who MV and Tioga Continue to Reign Supreme? Or Are There Some New Sheriffs in Town in the personnel of Starpoint & Central Valley Academy

Minisink Valley Is On the Warpath Seeking the Three-Peat; Can Anyone Wage a Coup D'etat to their Large School Supremacy!

Defending Champs, Tioga, Will be on the Prowl Hunting for a Repeat; Can Anybody Catch the Tigers by the Tail This Weekend in Syracuse?