On a weekend where many from the Empire State found themselves sitting in a state of solemn remembrance to commemorate the 20th anniversary of the September 11th attacks on the World Trade Center,  it was a quartet of our native sons/daughter and/or brothers/sister rising to the occasion in Lincoln, Nebraska to provide a moment of joy (even if brief)!

Michaela Beck, who was born in New York City,  did the "Apple" proud, splitting her four bouts to emerge with a 4th place showing at 59kg 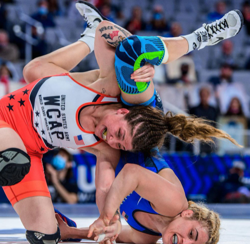 The JOKER gets the last laugh!!!  And there is a guardian angel smiling from ear-to-ear above!!!

Back in April, anyone with a heart could not help but be moved by one of the realest emotional displays in the history of sports...

Dropping the 57kg rubber match of the Olympic Trials to living legend/defending Gold medalist, Helen Maroulis (went on to seize bronze in Tokyo), the Rocky Point native [Burkert] broke down out of feelings of having failed her mother [Rosanne], who had passed the prior week....

Today, those tears and our-pouring of love came in the form of joy as Burkert is headed back to the Senior Worlds for the fourth time in her career following an epic battle against 2020 Olympian (5th)/2019 World titlist, Jacarra Winchester!

Winning the best-of-3 series, 2-1,  the so-called "joker" looked every bit the part of a magician on Sunday afternoon, as she 'pulled rabbits out of her hat' late in bouts 1 and 3 to be the last woman standing in the 55kg division.

Trailing 6-2 in the last :03 of regulation in match #1, Burkert converted a four-point feet-to-back toss with no triple zeros showing on the clock to go up 1-0 via the 6-6 criteria decision.

As act of equal true grit among WCAP trained athletes, the second chapter of their saga witnessed Winchester be the one to flash 11th hour heroics, as she overcame an 8-3 deficit with just 1:00 remaining in the 2nd period by striking for six unanswered points, highlighted by a whizzer flip for 2pt exposure at the 5:52 mark to win 9-8.

The stage set for a dramatic conclusion, the ladies delivered as expected in the finale, as each took a turn holding the advantage at various times throughout the bout...Forcing a pushout almost immediately after surrendering a shot clock violation, the New Yorker went into the break leading 1-1 on criteria...Another pushout half a minute into the second period gave Burkert the 2-1 edge outright...Winchester responded with consecutive 1pt tallies of her own, including a go-ahead pushout with 53 ticks still to be contest....Cue Jenna B!  Never panicking, the 28-year-old continued to attack, finding her opening in the last 20 second before she completed the single-leg in the final 10 ticks for the winning TD en route to the 4-3 decision!

In her aforementioned three earlier trips to Senior Worlds, Burkert had a trio of 15th place efforts in Uzbekistan (2014), Hungary (2018), and Kazakhstan (2019)....However, all previous appearances occurred up at 59kg or higher; and the 2021 version is the best we have ever seen her! 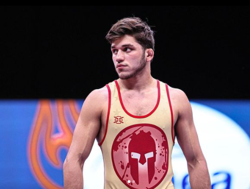 The waiting game is over...The FUTURE is now the PRESENT!!!

Left without the luxury of a safety net and needing to win two straight matches after faltering in the closing seconds of match #1 (was up 7-4 before allowing a pushout and a 2pt head pinch in the last :10 to fall behind on criteria; 8-7 final after an unsuccessful corner challenge),  the 2019 U.S. Open Champ/2019 World Team Trials runner-up [Diakomihalis]  dug deep and "controlled", if not dominated, the back 2/3s of the series, prevailing by margins of 5-2 and 12-2 to culminate the rally!!!

The clear aggressor from the get-go in bout #2, the two-time (2015, 2016) UWW Cadet World titlist enjoyed a 1-0 lead at the intermission after being awarded a point for his opponent's inactivity...His intensity level only grew stronger in the 2nd, as he added a pair of stepouts in the first 30 seconds to increase the cushion to 3-0...The back-breaker came at the 5:25 mark when Diakomihalis exposed his Garden State peer in the midst of a takedown attempt to further separate himself, 5-0...The "w" cemented, the NYS standout wisely kept his distance, allowing just a tandem of pushouts late in regulation...

Reminiscent of their meeting this past June at the Poland Open (won 15-4 by Diakomihalis on his way to the overall title), the deciding bout was surprisingly one-sided as the Empire Stater charged out of the gate like a man on a mission and never took his foot off the gas...Getting the better end of an exchange that commenced on his double-leg attempt and concluded when he hit a Sadulaev-inspired (think 2019 World finals) Petersen, the Spartan Combat representative surged to a 4-2 advantage less than 30 seconds into the 1st period...Showcasing the full array of his arsenal, the 22-year-old "Greek God" tacked on two additional takedowns, accompanied by one turn each by way of leg-lace and gut-wrench to secure the early stoppage in a mere 2:18...He punctuated his triumph with an emphatic pounding of the mat as a sign of total euphoria!

Despite this October being his rookie venture into the Senior World Championship experience, the USA, who is still seeking their first medal of any color at 65kg (or any equivalent weight class) since Bill Zadick won it all in 2006, has every reason to feel VERY confident in their young stud...Owning career victories over the likes of Bajrang Punia (2020 Olympic Bronze; 2018 World Silver), Ismail Musukaev (2020 Olympic 5th; 2019 World Bronze), and Vladimer Khinchegashvili (2016 Olympic Gold medalist; 2015 World Champion) among others,  YD is as battle-tested beyond as they come! 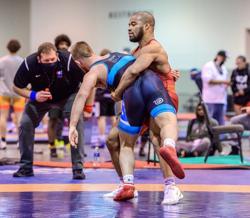 OSLO IS THE NEW TOKYO!!!

When 2021 started the former 2x NYS DI place-winner (3rd in 2015, 4th in 2014) for the Shen Plainsmen [Porter] set his sights on doing some major international traveling this summer....But, despite claiming the stop sign at the 2020 Olympic Trials, those plans were temporarily halted when he just missed out on qualifying the 77kg spot one month later at the last chance qualifier in Bulgaria...

Well, thanks to a perfect 4-0 weekend in the Husker State, it looks like his passport is going to being adding a stamp after all, as he is officially a first-time Senior World Team member!!!

The undeniable star of the "Throw Show". any time Porter has the privilege of working from top in par terre, those fortunate to be in attendance are usually treated to something dynamic and special....Such was true of his two-day stay in Nebraska!

Pitted against a familiar face in the championship series in the person of underdog/7th seeded Fritz Schierl (2021 UWW U.S. Nationals 4th; 2x UWW U23 Trials runner-up), Porter got the job done in two straight, but the victories were earned in quite differing manners!

Requiring just 1:46 to cap off a commanding 9-0 technical fall, Porter was awarded a passivity point and given his choice of par terre positioning after the first 90 second went scoreless....Like many have already and will continue to find out, when Porter is presented with a chance to lock, he seldom squanders that gift....Launching Schierl twice for four points apiece, the end came in the blind of an eye...

Round #2 seemed well on its way to following the same pattern as a scoreless minute and a half was met by Porter again jumping out to a sizable advantage, with seven quick points (1pt passivity, 4pt throw, 2pt headlock) in a span of approximately 20 seconds...The situation then got interesting as Schierl converted his own 2pt throw to trail 7-2 at the midway point....An inactivity call against the Empire Stater with 1:30 remaining cut the deficit to 7-3 before back-to-back caution +2 calls evened the scoreboard at 7-7 (Criteria for JP) with exactly 1:00 still to be settled....Defending a gut-wrench, Porter successfully stepped over for a 2pt exposure in the last :20 to break and survive with the 9-7 decision.

Porter rounded out his resume in Lincoln by pitching a 10-0 TF over 3x NCAA Qualifier/2x UWW U23 FS Trials 3rd Quentin Perez in his first match and then closing out Saturday with the 6-5 decision versus 2021 UWW Senior U.S. National Champion/2010 Junior World Teamer (20th), Alec Ortiz.

As acknowledged above, even though this fall will symbolize his initial foray at Senior Worlds,  Porter is still a veteran presence for the stars and stripes....In excursions to Poland (2017), Romania (2018), and Hungary (2019) for the U23 Championships, he has posted placements of 16th, 25th, and 24th respectively. 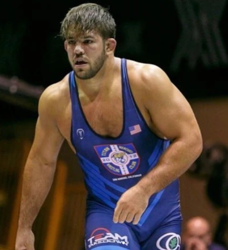 According to the pundits, "125kg is now the property of the young guns"....

It's a good thing that no one gave that memo to the pride of Duanesburg [Gwiazdowski], as he clearly is a gentleman of differing opinion on the matter!!!

Out-scoring his four opponents by a statement-making degree of 35-3, "Gwiz" was not just winning matches the past two days, he was leaving no doubt that his reign atop the U.S. wrestling scene is just beginning!!!

A runner-up at the 2020 Olympic Trials to eventual Gold medalist, Gable Steveson (who has likely wrestled his last international competition after signing a contract with World Wrestling Entertainment),  the former two-time NYS DII champ for the Eagles in 2010 and 2011 (as well as a 2012 NCAA All-American for Binghamton before transferring to and winning consecutive National crowns for North Carolina State in '14 and '15), simply was in a class of his own yesterday and today...

Avenging a 10-7 loss in their last head-to-head clash at last December's RTC Cup (they actually split with the NYer winning one day earlier by tech fall), Gwiazdowski never seemed to be in serious trouble in the best-of-3, as he swept straight matches over 2021 NCAA runner-up/2020 U.S. Senior National Champion/2019 UWW Junior World titlist, Mason Parris, by outcomes of 6-0 and 10-3.

Relying on his stout defense for much of match #1, the newly installed Coach/Athlete at Spartan Combat utilized a crotch lift and counter spin-behind to lead 4-0 at the end of the first period....The former "Big Daddy" from Section II added a single-leg TD in the 2nd to account for the final score...

Contrary to what transpired earlier, bout #2 was all about Gwiazdowski moving forward and asserting his will in the form of consistent and polished attacks....Wasting no time in drawing first blood with a single-leg TD at the onset of the 1st period, the 28-year-old took the 2-0 edge into the break...But alas, the tracks were laid for what came next as the Joe Bena protege pulled away from his Wolverine (University of Michigan) foe in the last 3:00, recording three takedowns (the final one coming with :45 remaining), complemented by a 2pt gut-wrench (after the second TD of the period)...A pushout and takedown by Parris during the second period was the only thing that prevented the New Yorker from wrapping up an all-around immaculate (unbeaten, unscored upon) performance!

Making the trek to the World Championships for the fourth time in as many opportunities since 2017, it goes without saying that Gwiazdowski is going to fiercely determined in his quest to erase the bad memories of a 2019 appearance that landed him in 19th (after back-to-back bronzes in '17 and '18).