The Chiefs are making news yet again

Back in 2019 The Massapequa Chiefs put the entire state on notice by winning the Division 1 NYS Dual Meet Championship. In one day, they defeated Section 9 Champions Minisink Valley and Section 11 Champions Sachem East in pool play. They followed up that performance with upending Section 3 Champions Fulton and taking out the overall favorites, Hilton Cadets, in the finale in one of the epic dual meets in recent history.

"This award goes to the entire coaching staff at Massapequa, not just me. It is a valiant group effort each season and for that I am extremely grateful to have a great supporting cast." - Massapequa HC Ron Serrano

Although COVID may have taken the standard wrestling season away, it did not hinder Coach Serrano's staff in moving forward as one of the most dominant teams in Section 8. Nassau County is a premiere spot for excellent wrestling and the Green Clad contingent just won their first Sectional Team Championship in Division 1 in 2020.

After a year lapse removed from the NYS Duals, the Chiefs were back to work to prove to the doubters that they are still a top of Nassau County. In total, 55 wrestlers took the mats in 2021 during a COVID shortened season. Determined to get as much mat time as possible, all wrestlers followed strict guidelines in order to compete.

"We used three different wrestling rooms, did weekly testing, were very selective in practice, kids used the same practice partners to prevent a potential spread. There was contract tracing, mask wearing daily as well as their headgear. We as a collective group were determined not to fail and go down swinging." - Serrano 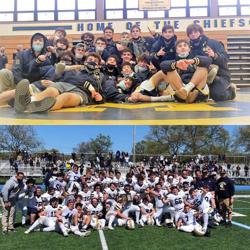 Nassau County got the go ahead for winter sports in early February. The top 10 teams in Section 8 were placed in Conference 1. In total, Massapequa won all 7 dual meets, convincingly as well.

Overall, Coach Serrano eluded to the fact that the kids embraced the opportunity presented to them and followed all guidelines to perfection in order to have a successful season.

This July, fifteen Massapequa grapplers are heading to Ohio State for a wrestling camp, headed by Long Island Native and current tOSU Head Coach Tom Ryan. 2021 senior Chase Liardi will be attending Ohio State University next fall and plans to compete for the Buckeyes. Coach Serrano feels this will be amazing opportunity for his wrestlers to gain a wealth of experience and knowledge as well as supporting Chase as he makes the transition to Ohio St. 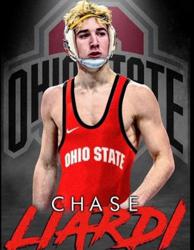 Chase will go down as arguably one of the best Massapequa wrestlers in their rich history. Chase is ranked #5 on NYWN's Class of 2021 Big Board. His credentials include:

"Chase will forever be remembered for what he has done on the mat but that shouldn't be the only thing. Chase epitomizes the perfect student athlete. He gets good grades, is very responsible and has great character. He is the first Massapequa wrestler to compete for a top 10 school in the country. He has earned every bit of success thus far and will undoubtedly succeed at the next level." - Serrano

List of Wrestlers Attending the tOSU Wrestling Camp in July:

In the end, 8 wrestlers finish with all-state status

12 Wrestlers remain per weight after an action packed Day 1