Sander Miller - A Young Man With Many Talents

Edgemont's Miller excels on and off the mat

Sander Miller: Off the mat 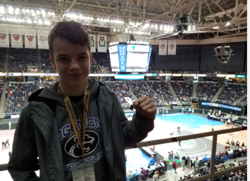 There is truly a remarkable young man graciously making a name for himself at Edgemont HS in Westchester County.  Reaching the conclusion of his junior year, Sander Miller is not only performing at a high level on the wrestling mat but off as well. For far too long, success is the sport of wrestling is merely measured by wins and losses combined sectional, state and national accolades. However, success is life goes beyond wrestling and Sander Miller is on the right path.

Sander's drive, determination and intellect makes him stand out above the crowd. Most recently, he became an NHSCA Academic All-American. More impressively, he was the only wrestler from New York State to be awarded that honor.

"I was really excited when I got the news. I'm really proud of my in-classroom accomplishments. It is nice to be recognized on and off the mat. It’s a huge accomplishment."

His classload is like no other high school Junior, not to mention his extracurricular activities.

"I like to challenge myself with my classes. I'm currently taking AP US History and AP Chemistry."

Sander, along with friend Jacob Kurumunda, founded the Aerospace Engineering Club at Edgemont HS. The club consists of 8 members in total that meet once a week. He thoroughly enjoys engineering and all of its idiosyncrasies. He plans to build his own mini model rocket with an actual engine and enter the American Rocketry Challenge.

"I'm really intrigued on entering this challenge. The rocket could go as high as 800 feet and I must record proof of flight qualifications"

On top of being the co-founder of the Aerospace Engineering Club, Sander is also a Jazz Vibraphonist and has a profound niche for Plasma Physics. His favorite class is Science Scholars. In that class, Sander was instructed to find a real world mentor or scientist via email. He eventually connected with Adam Kuang and Norman Cao from the Plasma Science and Fusion Center at MIT.

"I have gained an umpteen amount of knowledge from both Adam and Norman. They have included me in their real world experiments while doing some data analysis on the side. We usually meet via zoom once a month or so to discuss what each side has been doing and how we can help each other."

Sander Miller: On the mat

One of the most common phrases in sports today is "Trust The Process". That one cliche holds many meanings. How well do you prepare or how hard are you working in practice? What about proper nutrition or the right amount of rest so your body can heal. All of this needs to be equally distributed in order to excel.

Sander's mindset has changed dramatically over the course of his 3 year varsity career. He realized immediately that in order to be successful on the mat was to put in the time ON THE MAT. His initial season for the Panthers didn't go as well as he had hoped.

"I was very inexperienced as a freshman. It was a culture shock nonetheless. I did qualify for Sectionals however went 0-2."

At that point, a light bulb went off in his head and he knew something had to change in order to prevent another lackluster performance. That off-season is when Sander really started "trusting the process". He started attending GPS wrestling Club four times a week under the tutelage of Club Coach Grant Paswell.

"I don't play a fall sport so that allowed me to train at GPS all the way up the season starting. I give all the credit to GPS for my success. My teammate and training partner Noah Bernstein would agree. GPS has made us both better wrestlers and better people in general."

It's hard to argue how impactful GPS has been on the progression of Sander's career. In a calendar year, he went from going 0-2 at sectionals as a freshman to winning a Section 1 title as a sophomore. That is astounding to say the least.

"I had a lot of confidence going into my sophomore season. I knew I had a chance to win sectionals." 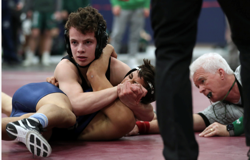 Sander would end up wrestling Putnam Valley's David Ordonez in the Section 1 Division 2 finals with the winner heading to Albany for the NYS Tournament.

"It was definitely a tough match and I felt it was pretty even at first. I found myself in a hole, down 3 in the third period. I got a takedown which then led to me pinning him to secure the win."

Sander would ride that wave into the "wrestle-in match" at states. He squared off with Section 11 champion Brendan Goodrich of Mt. Sinai. He found himself in a similar situation, losing 7-4. The cardiac kid strikes again as he reversed Goodrich to his back and secured the fall.

Unfortunately, he would lose back to back matches to the #1 seed and eventual champion Gage DeNatale of Locust Valley and at-large qualifier Luke Tomlinson of Maple Grove thus ending his inaugural state tournament appearance.

Sander's recent accolades has landed him in New York Wrestling News top 100 Juniors. He won the "unofficial" Section 1 tournament over Marcello Bernasconi of John Jay East Fishkill followed by a 4-2 performance at the Journeymen/RUDIS NYS Championships. Miller lost to top seed Rocco Camillaci in round 1 only to fight his way through the backside winning 4 consecutive matches before falling in the blood round to Zach Harrington of Sidney. Lastly, a trip to Virginia Beach and the NHSCA National Tournament. His 1-2 performance wasn't ideal however he gained a wealth of experience and can translate that into another stellar off-season in preparation for one final run at that elusive NYS Championship next winter.