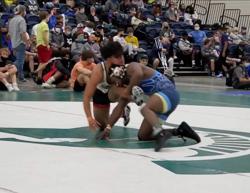 What a weekend for 2x NYS Finalist Jayden Scott. The Rush Henrietta junior made a huge statement this past weekend at the Grappler Fall Classic by taking down the gold at 140lbs. Scott complied a 6-0 record, outscoring his opponents 61-28. Jayden's progression heading into his junior campaign has been on the upswing since his loss to current Iowa St. freshman Zach Redding in the NYS finals last March. Jayden has made his way into the national rankings, #17 by TheOpenMat and #19 by FloWrestling. He should easily jump into the top 10 once the next set of rankings are leased. Jayden also jumps up to #4 in our NYWN Class of 2022 Rankings.

Jayden started off Saturday with two dominating performances, 18-8 and 17-7 as he headed into the quarterfinals. Jayden would go onto to defeat 2x Section 8 Place Finisher Jack Roszko of Manhasset 10-5 in the round of 16 setting up a showdown with former NYS PF Myles Griffin of Lakeland High Prep in Florida. Griffin took 3rd at 99lbs for JD-CBA out of Section 3. A stellar 3-2 decision in favor of the Royal Comet landed him a spot in the semi-finals against Jayden Gomez. Gomez came into the tournament highly touted. He was the defending GFC Champion and had a slew of accolades under his belt including 2019 Fargo All-American and 2018 NHSCA Champion. Scott would score the lone takedown in the match in overtime and defeat Gomez 3-1 to advance to the finale.

Many anticipated a finals bout against the highly regarded Caden McCrary of Georgia however 2019 Fargo All-American Jack Crook would secure the fall over McCrary and now face Scott for the 140lb crown. The onslaught was heavy as Scott put the match out of reach. He doubled up Crook for a 10-5 victory.

Fellow Section 5 studs Nick Sanko of Pittsford and Carter Schubert of HF-L were in action as well, Sanko @ 152lbs and Schubert @ 145lbs. Sanko finished with a 5-1 record, good for the bronze medal. On the frontside, Nick registered three straight major decisions over some quality competition. Eventual runner-up RJ Weston of Georgia (Double Fargo AA) gave  Sanko his only loss of the tournament 6-0. Two wins on the backside, 9-3 & 12-7, ended the Pittsford Junior's tournament with a respectable 3rd place finish.  Sanko's performance is definitely noteworthy as he defeated 3 state champions, 2 of which are nationally ranked. Sanko jumps to #2 in the NYWN's Class of 2022 Rankings.

Carter Schubert started off well at 145lbs earning a 7-0 decision over Ransom Randolph of Florida. Back to back losses however ended the 2x NYS PF's tournament prematurely.

Nationally ranked hammer Manuel Rojas of Michigan issued Hansen his first loss of the tournament, a fall in the 3rd period. Rojas would go on to win the tournament. Hansen would drop his next bout to via fall before closing out his tournament with a 11-5 decision over Michigan all-stater Avery Dickerson.