The Wildcats had another stellar season, completing dominating Section 10. Gouverneur went undefeated in dual meets against Section 10 opponents. They claimed their third straight Section 10 Dual Meet championship which landed them at the NYS duals yet again. Although they were missing a few key components from their lineup, they battled against top seed Cold spring Harbor and at-large qualifier Iroquois, losing 56-27 & 58-24 respectively.

A non-league match against Section 3's South Jeff-Sandy Creek gave the Wildcats a solid dual meet heading into the NYS Duals. SJSC would win 43-36 in a close one. 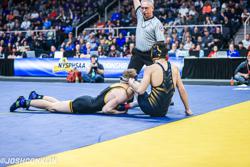 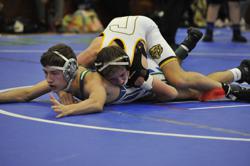 A solid 2020 season for Coach Morrison's Bears was highlighted in Mid-February at the Section 10 Championships. Canton would tie powerhouse Gouverneur at 168 points. The Bears crowned only one champion, Matt Haycook @ 113lbs. Haycook was highly touted throughout the entire season and led the Bears in wins. Matt claimed his second section 10 title of his career.

Four other Bears made the Section 10 finals. Defending Champion Cohl McIntosh was upended by Ogdensburg's Archie Green @ 220lbs. Heavyweight David Jewtraw traded wins with Malone's Brody Fountain throughout the season. Fountain however won their final match via fall in the 285lb finals. Randy Clifford was denied his second Section 10 title at 145lbs losing to Ogdensburg's Tristan Richardson. Hunter Baluvelt rounded out the group with his second place finish at 160lbs. 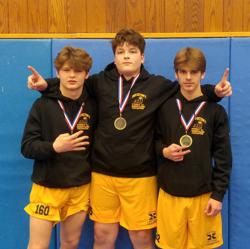 The furthest north team in Section 10, The Malone Huskies, finished a mere half point behind Gouverneur and Canton at the Section 10 Tournament. The three team race was the closest in history. Malone finished with three champions and seven finalists. Coach Botto's squad surprised many with their performance at the qualifier. Lucas Martin and Alfred MacNeil came in as favorites and won their weight classes convincingly. Brody Fountain became the Huskies' third champion, winning the 285lb title. Fountain and Canton's David Jewtraw alternated wins during the season. Brody captured his first Section 10 title with a fall in 2:53 over the Canton Golden Bear.

Malone graduated 3x Section 10 Champion Alfred MacNeil in 2020. The loss of MacNeil puts a gaping hole in their lineup but returning 6 finalists will ultimately enhance the Huskie squad. Lucas Martin and Alex Recore will be the leaders in 2021. Martin is vying for his third title while Recore aim for his first. 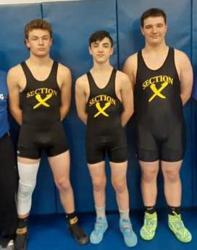 A very young Blue Devil lineup showed composure and grit this past season. With only one senior on this year's team, Ogdensburg is expected to close the gap on some of the other Section 10 teams. OFA had three sectional champions leading their squad. Wins leader Tristan Richardson captured his third Section 10 title in his career. A fourth in 2021 seems a near lock for the OFA star. Tristan's season was very successful as he took second at four straight tournaments before breaking through in mid January by winning the Michael J. Baker Classic. Richardson lost to hard fought matches at states, 7-4 to Michael Leandrou (Oyster Bay-8) and 5-3 SV1 to David Austin (Whitehall-2).

Freshmen Brayden Wall and Archie Green suprised all of Seciton 10 by earning their automatic berth to states. Wall spent alot of time at 113lbs before dropping to 106. The drop proved vital as he defeated Hunter Mashaw of Gouverneur 8-1 to claim his first Section 10 championship. Green had to go through defending S10 Champion Cohl McIntosh of Canton. McIntosh and Green split during the year at one a piece. The rubber match went to Green via a fall in the first period at 1:42.

Quietly both Adam Calton and Mitchell McCarthy eclipsed the 25 win plateau in 2020. 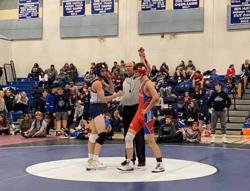 Massena is the lone division 1 school in Section 10 but competes against all of the division 2 schools throughout the season. The Red Raiders lone dual meet win came against Ogdensburg 42-24 in Early February. In a battle of Section 10 Champions, Massena's Bailey O'Leary pinned OFA's Archiew Green.

Freshman Colden Hardy led Massena in wins (21) with sophomore Mac LaPage close behind with 20. Hardy qualified for states for a second straight season. He battled with NYS finalist George Oroudjov in round 1, even putting him on his back in a cradle.  Colden made solid strides this past season and plans to lead the Red Raiders into 2021. LaPage had a solid season and was in line to compete at states however was removed allowing for A5 Cameron Burrell of New Rochelle-1 to replace him. Mac was the champion at the Nate Wood Memorial and Livermore Invitational. From Mac's freshman year to this season, he more than tripled his win total while cutting his losses in half. The future looks bright for both LaPage and Hardy.