Two great careers come to an end; controversy has the entire state buzzing

I have been attending the NYS tournament for 20 years now and have witnessed a multitude of highs and lows, cheers and boos, hearthache and triumph and the 2020 edition did not disappoint.

While en route to Albany my mind began to ponder the many highlights of each season that has past and things that stood out to me. My excitement began to grow the closer I got to Albany. Some of the highs that crept into my mind were seeing 3 wrestlers (now 4) win 5x NYS Titles and the very first wrestler in Jesse Jantzen to win 4 NYS Titles and highly anticipated finals bouts such as Yianni/Vito and even as far back as Mormile/Flynn in 2001. Of course with triumph comes heartbreaks and shocking moments like the headgear debacle in 2005 all the way to the bite heard around the world last year.

From the introduction of each section Friday morning to the parade of champions Saturday night, the entire culture that is NYS Wrestling is bigger than wrestling itself. It has merely become a way of life for me that will expand beyond another 20 years.

This year's NYS Tournament amassed a record 15,606 spectators. I fully expect that attendance record to falter in 2021. I'll see you there!

Diakomihalis and Noto finish on top 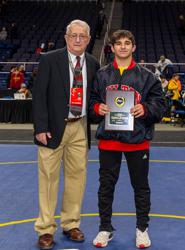 Two section 5 studs concluded their illustrious careers in dominating fashion. Hilton's Greg Diakomihalis capped off his fifth straight NYS Championship with an 8-2 decision of Massapequa Junior Chase Liardi. Diakomihalis joins an elite company of 5x NYS Champions, four to be exact. Chenango Forks' Troy Nickerson was the first followed by 2020 PAC-12 Champion Jacori Teemer (Long Beach-8) and Adam Busiello (Eastport-South Manor-11). An injury sidelined the future Cornell star for much of the offseason and even put this season in jeopardy. Determined to battle back stronger than ever, the senior Cadet made his anticipated return in January. He would wrap up his season with a perfect 25-0 record. Greg went through a gauntlet during his 5 title runs. Two championship seasons ended by defeating current Hofstra starter and NYS Champion Dylan Ryder. 2020 NYS Champion Justin McDougald was sandwiched in between the Ryder finals. Nassau County made their attempt with Josiah Encarnacion and the aforementioned Liardi. Of the 5, Ryder was the only competitor to come close in 2018, a 3-2 UTB win for Diakomihalis. 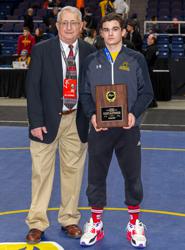 Not to be outdone by Diakomihalis, Honeoye Falls-Lima Senior Anthony Noto put together quite the career as well. If it weren't for Greg D then Noto could have arguably had one of the most successful careers in Section 5 history. He definitely ranks towards the top in my book. More impressive was the opponents that Noto defeated en route to his 4 NYS Championships. His first two titles came against now 2x NYS Champion Jordan Titus of Center Moriches. Two battles for the ages on the grandest stage of them all. He final two came against Section 3 studs Micah Roes of Lowville and Avery Leonard of Cooperstown. Roes was a 2x NYS finalist and 3x Placer while Leonard is a 2x placer and 1x finalist and still has a year to go. Anthony is heading south in the fall and will join Wolfpack at North Carolina St. 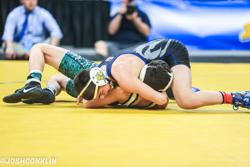 There have been many wrestlers in NYS history who have blasted onto the scene in their inaugural varsity season. Most lived up to their hype and performed beyond expectations. It's time to add another one to that elusive list. Carmel's PJ Duke become the only second 7th grader to win a NYS Championship, joining Tristan Rifanburg of Norwich who won the 96lb class back in 2010. Duke was dominant, plain and simple, not just at the NYS Tournament but throughout the entire season. Of Peter's 45 wins, only three would go the distance. All three came against studs from Powerhouse Wyoming Seminary. There wasn't a single wrestler from New York that lasted a full 6 minutes on the mat with PJ. You think that is impressive? Duke would win the prestigious Eastern States Classic back in January. If the rumors flying that Duke may be heading south to a well known national powerhouse for his high school career then we only have one more season left to watch this kid in action and I promise you, be prepared to be astonished.

Where did Nassau County come from? 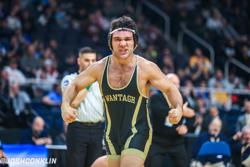 When the sectional teams scores were read on Saturday night I actually thought they had screwed up. Section 8 sat atop of the standings at 224.5 points outlasting favorite Section 11 who ended with 210. Other than Section 5 winning last season, Suffolk County reign supreme for over a decade. Are we in store for a shift in power? Has Nassau County become the new strength of Long Island? The Green and White have won 2 of the 3 NYS Duals Titles (Wantagh and Massapequa) and always brings a slew of talent north to Albany every year. Nassau County powerhouses MacArthur, Massapequa, Wantagh, Long Beach and now Manhasset anchor their sectional team and will be a force for the years to come.

Section 3 does it again in D2 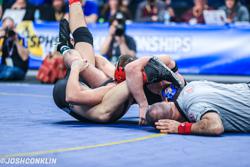 On the D2 side of things, Section 3 is always towards the top of the team standings. After a 1 year hiatus, the Blue and Gold return to prominence in 2020 by taking out defending champions Section 5 222-219.5. Winning on the backside proved key for the Central NY squad. The "3" would only have two champions in Jacob Null and Tyler Mousaw and 4 other finalists that took home the silver medal. Every year it seems like a 3 horse race to the top between Section 3, 4 and 5. This year was the same as all three amassed over 200 points.