Gwiz wins two close ones, both on criteria 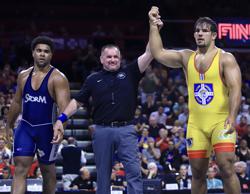 Duanesburg native Nick Gwiazdowski kept it rolling on Saturday at Final X: Rutgers. The 2x NCAA Champion from North Carolina St took on freshman sensation Gable Stevenson of Minnesota. An exciting first match which included a bunch of flurries, some great defense and Gable driving Gwiz into the front row! In the end, Gwiz would secure a late takedown to take the lead 4-4 on criteria and claim the first match.

Match 2 had a different feel to it with Gable taking a mere different approach. Jocking for position seems to be the gameplan in period 1. A step out would be the only scoring in favor of Stevenson. The second period started off with Gable being the aggressor but Gwiz's experience and hip pressure seem to be the deciding factor. Like match 1, Nick would regain the lead late in the match, this time 3-3 on criteria and hold on to make his 3rd straight World Team.

Yianni drops both bouts to Zain but not without some speculation

At the 2019 US Open Yianni Diakomihalis would go on to defeat Penn St. great and 3x NCAA Champion Zain Retherford. Going into Final X: Rutgers, the Cornell sophomore knew he was in for quite the battle.  Two different styles clashed again and it definitely didn't disappoint.

The first period of match 1  started out quick for Yianni but would end in favor of Zain. Yianni's quick two seem to set the pace for the period however Zain would counter with exposure points notting things up at 2. Back on their feet and the rest of the period would belong to Zain. Yianni knew going into the match with Zain that his heavy hands could be vital in stopping his offense. The final minute proved crucial as Zain ended period 1 winning on criteria. Onto period 2 and the Zain Train took the sail right out of Yianni quick as he converted a takedown and leg lace to take a 6-2 lead. Yianni closed the gap with 2 of his own after the restart. Retherford regains his composure and scores yet again another takedown followed by another 2 at the end claiming match 1, 10-4.

And now is when the controversy starts. Match 2 starts out with an absolute bang, a bunch of action, takedowns and exposures. In the end, Yianni takes a 6-4 lead going into period 2. Period 2 was one for the ages. More action than the first. Shot after shot combined with scrambles after scrambles leading to one of the most highly talked about calls in recent history. Initially, the scoreboard read 8-6 Yianni at the end of the period. Zain's corner would challenge and would win that challenge in the end. Retherford goes on to his second straight World Team. Watch the controversial call via flowrestling below.