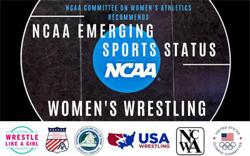 The NCAA’s Committee on Women’s Athletics (CWA) has “recommended that all three divisions of the NCAA governance structure add women’s wrestling as an NCAA emerging sport, effective August 1, 2020.”

Each NCAA division (Division I, Division II and Division III) will address this recommendation separately, and will determine independently if women’s wrestling is added to the division’s Emerging Sports list.

Beginning in August 2017, a coalition of wrestling organizations, including Wrestle Like A Girl, the National Wrestling Coaches Association, USA Wrestling, the National Wrestling Hall of Fame, the U.S. Olympic Committee, and expanding to include the National Collegiate Wrestling Association, worked together to submit an application to the NCAA CWA for women’s wrestling to attain Emerging Sport Status. All of the national leaders in wrestling have supported this effort and supplied information for the bid that was sent to the NCAA CWA, in compliance with all of the requirements of Emerging Sport Status.

The wrestling community applauds and thanks the NCAA’s Committee on Women’s Athletics for its governance and vision in reviewing the women’s wrestling application and recommending wrestling for NCAA Emerging Sport Status.

The wrestling community celebrates the role Title IX has played in developing women’s wrestling opportunities, and pledges to continue to build the sport with that spirit of inclusion until it achieves official Championship status within the NCAA, and thereafter.

“This is a great day for wrestling. The recommendation from the NCAA Committee on Women’s Athletics could impact the lives of thousands of women student-athlete wrestlers for generations to come. We thank the efforts of all the wrestling organizations who have led the charge seeking Emerging Sport Status. USA Wrestling is fully committed to supporting wrestling for women and girls at all levels and is excited about the future. We are encouraged by today’s decision, and fully expect it to help accelerate the growth of women’s wrestling,” said Rich Bender, Executive Director of USA Wrestling.

“The NWCA is eternally grateful for all of the collaborative efforts between the wrestling community and the NCAA to make this day possible. This is a great day for countless young women across the nation who are one step closer to having access to an NCAA championship for women’s wrestling,” said Mike Moyer, Executive Director of the National Wrestling Coaches Association.

“Wrestle Like A Girl and its national partners share in the glory of the women’s wrestling recommendation to the NCAA Div. I, II, and III Committees for Emerging Sports Status. Collaborating with state high school athletic associations and the Olympic movement, and powered by Title IX, thousands of women will now have access to the NCAA’s annual pool of $2.9 billion in athletic scholarships providing powerful sports experiences and educational opportunities. Wrestling, as a one-on-one contact sport, uniquely teaches women agency over space, voice and body. We are proud to be a leading voice for equality in the sport of wrestling, and at-large,” said Sally Roberts, two-time World Bronze medalist, combat veteran and founder of Wrestle Like A Girl.”

“The National Wrestling Hall of Fame fully supports Emerging Sports status for women’s wrestling and takes great pride in sharing the message that wrestling does not discriminate based on gender, size, ethnicity or physical limitations and it is truly a ‘Sport For All’ and ‘Any BODY Can Wrestle’,” said Lee Roy Smith, Executive Director of the National Wrestling Hall of Fame. “We look forward to welcoming many more females into the Hall of Fame as women’s wrestling continues to grow as a result of this decision.”

“The NCWA is proud to have been a small part of this collaborative effort to provide women the inclusive opportunity to compete at the highest levels in college sport through the NCAA. With this outstanding victory for wrestling we remain committed in our efforts to the expansion of wrestling opportunities to student athletes at all levels,” said Jim Giunta, Executive Director of the National Collegiate Wrestling Association.

Currently, there are 23 NCAA programs (varsity or club) that have met the qualifications to be included in the NCAA ESS bid, with a minimum roster size of six, and a competition schedule with at least five contests. An additional 13 NCAA programs are scheduled to add women’s wrestling for the upcoming 2020 or 2021 competition season. In addition, dozens of women’s wrestling clubs have been established on other NCAA-affiliated campuses and are working towards increasing their rosters and competition schedules.

Overall, the number of women’s college wrestling programs from all college sports associations combined (both existing and announced) is over 83 and growing.

Women’s college wrestling has existed since the early 1990’s, with the first varsity team created in 1993. There have been women’s college wrestling national championships, including institutions from all affiliations since 2004. This past year, the NAIA gave invitational sport status to women’s wrestling and held its first national invitational championships at Jamestown University in 2019.

The most recent sport which has been added to the list of NCAA emerging sports was Beach Volleyball in 2010. To date, five women’s sports have moved from NCAA Emerging Sports Status to Championship Status: rowing, ice hockey, water polo, bowling and beach volleyball.

The NCAA emerging sports process was created in 1994, with a new guide released in September 2016. Under these new procedures, which provided additional guidance and objectivity in the process, wrestling submitted its initial bid in August 2017, followed by a resubmission in August 2018, with two more updates in 2019. Through the combined and unified effort of the wrestling community, today’s decision by the NCAA CWA has moved wrestling to the next stage of the process. With the possibility of reaching official Emerging Sport Status in August 2020, the wrestling community is poised to continue the excitement and momentum moving forward.