Busiello is WOTY, Massepequa's Serrano is Coach of The Year

Wrestler Of The Year - Adam Busiello 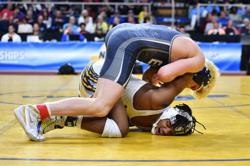 Adam's 2019 senior season was just a pure joy for the fans to witness such history being made. After a close 3-2 decision over Niagara Falls' Willie McDougald in Mid-January, many started to question whether or not the Section 6 standout could dethrone the defending 4x NYS champion if they met again at the state tournament. Busiello would put all skepticism to rest as he pinned McDougald near the end of the second period. A standing ovation ensued as Adam would leave his mark in NYS history.

Busiello finishes with an astounding 299-7 career record and is ranked #4 in the country at 138lbs according to InterMat.

To some, Massapequa came out of nowhere this year. Not many outside of Nassau County knew the firepower that the Chiefs had.  Massapequa would start out ranked #7 in the initial NYWN team rankings. Coach Serrano's squad would take off from there and never look back. The Chiefs kept winning, knocking off powerhouses such as Fulton and Rocky Point along the way.

Onto the NYS Duals, Coach Serrano's Chiefs would earn the top seed in the tournament. To the dismay of many, Massapequa would be paired with Section 11's Sachem East and Section 9's Minisink Valley. After defeating both, Massapequa would defeat Fulton 42-28 in the semi-finals followed by a 41-29 championship win over Section 5 juggernaut Hilton to cap off an undefeated 2018-2019 season.